This content rated appropriate for audience: K for Kids

Many do not seem to understand the fanfiction community from an author’s point of view. Now, if you have ever written a story, or made fanart, you might better understand it.

The fanfiction community is massive, hugely diverse, and completely free. People create masterpieces, absolute works of art for no charge, free to view. They then submit this content to the world, and get either no response to their work or comments like, “Very interesting,” “Cool,” and “Good story/art/idea.”

Now, as a fanfiction author, I can tell you that we still very much so appreciate those responses to our work. If you’re one of those people who write essays as your reply to people’s work, I thank you.

However, a lot of people take for granted the colossal amount of work that fanfiction, in any form, takes to make. They will read through the stories, never leaving any indication they were ever there, and never return.

That is not what I’m talking about though; I want to bring attention to people who are so entitled they think that the creators are somehow required to give them more content… for free.

The people you see in fanfiction.net reviews, in the comments on artwork, who aren’t constructively criticizing but insulting the creator, are the people I want to bring attention to.

If you’re one of those people, you should be ashamed of yourself. If you aren’t paying these creators for their work, you shouldn’t be coming in and demanding they do what you want.

Some authors think the most soul-crushing feeling is when they work hard on something, submit it, and have absolutely no feedback. However, as soon as they get their first comment, and it’s a derogatory hateful and just plain mean reply, they understand that there is a worse feeling.

As a fanfiction author, these kinds of people piss me off.

So far, I’ve been vague, referring to the fanmade content community as a whole, but now I’m going to be very specific.

Fanfiction.net does not care in the least for their creators; in fact, it seems almost to hate them. There are many things they do to make the author’s experience god awful, but for now, I’m going to talk about the review system.

I’m going to start by comparing the system on fanfiction.net to the one that Amazon Kindle uses for its authors. On Amazon, reviews can be replied to by other readers and given star ratings, this is extremely important.

Let’s say for instance that someone comes to a fanfiction story, and because they don’t like it, they leave a horrible review attacking the author for something that isn’t even in the story.

The author’s fanbase can then give their reply to this review, point out that they are wrong, and give it a low rating so that it isn’t as viewable by potential new readers trying to get an idea of the story.

Fanfiction.net doesn’t let you do any of this. There is no rating system for reviews, no way to reply, people can say whatever they want, and that’s now the face of your story.

On a computer browser, this isn’t as much of a problem, however, on mobile and specifically fanfiction.net’s app this is a huge problem. 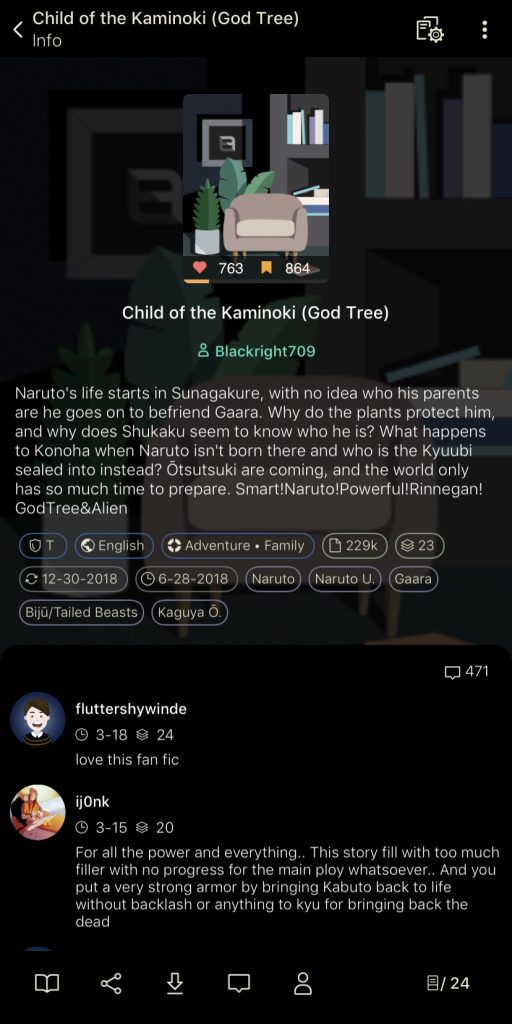 Whoever has most recently left a review, is now the face of the entire story. There is no way to refute or respond to these reviews in a way that anyone can directly or immediately see.

Authors tend to leave replies to reviews in their author notes at the end of each chapter, however, people don’t see those without reading the story.

One thought on “A little perspective on context”